A Day Trip to Ballybunion

We are all guilty of ignoring what’s available at home and instead choose to hop on a plane and explore somewhere ‘exotic’ and ‘new’ rather than exploring what’s readily available at a close distance. I have definitely muttered excuses like ‘the weather’ and ‘I want to just get away somewhere different’ at some point. Now being the ultimate time to explore what’s on my doorstep, I took the short drive from Killarney to the seaside town of Ballybunion https://www.ballybunion.ie/.

Named for the Bunyan family, who were caretakers of the region under the reign of the powerful Fitzmaurice lords in the 1500s, has been a popular destination for years by people all over Ireland, particularly neighbouring Limerick and Clare, and is less visited by international visitors, who tend to choose more typical tourist spots like Killarney when visiting Kerry. You might recognize the name due to the world renowned Ballybunion Golf Club https://www.ballybuniongolfclub.com/ where former US president Bill Clinton played a few rounds (they are very proud of this and his statue will greet you on arrival). There are two courses available with vastly different green fees. For non-members, the Old Course costs €250 and the Cashen Course, €80. I would recommend booking in advance if golf if is your passion, as both courses are very popular and sell out fast.

The place itself, though buzzing with activity, has a local charm that is rare to find and an array of dramatic beaches on offer. Named for different times, when men bathed separately from women and children and nuns separately again (more to that later) there are three main beaches in the town.

Spoilt for choice with a selection of lovely beaches

The ‘Men’s Beach’ is the largest of the beaches near the town and is overlooked by the imposing ruins of Ballybunion Castle which is placed precariously on top of the outcrop known as the ‘Virgin’s Rock (we’ll leave that one alone). Due to its size, it is the best strand to wander along and when the tide is out, you can extend your walk further beyond the castle.

‘Ladies Beach’ is much more enclosed and the wind does hit you strongly on your descent to the beach. Unusual rock formations surround you on both sides, which somehow adds a wildness to the strand. The sand somehow feels rougher too (but that could just be my imagination). Collins’ Seaweed Baths https://www.ballybunion.ie/things-to-do/attractions/ballybunion-seaweed-baths.html have been residents of the beach since the 1920s and are available on a drop-in only basis, so if you need a quick respite, be sure to pop in!

‘Nun’s Beach’ is the most inaccessible of the three beaches but the most incredible in my opinion. Carved into the cliff itself, it is located just under the local convent and gets its name from the brave nuns who descended the rock for their daily dips into the stormy sea. The seclusion of this beach must have appealed to the ladies of the cloth and was respected as a private place for them to bathe. It should definitely only be visited on a calm day, if you’re sure footed, not afraid of heights and a climb! The last section is done by rope so it might be best to leave this beach to the nuns!

If this sounds like too much of an adventure, you can take the amazing cliff side walk which takes about an hour and is well marked along the way. You can do a circular walk by ‘Ladies Beach’: and high along the coast with views overlooking ‘Nun’s Beach’. You’ll pass by the ‘Nine Daughter’s Hole’ (now cordoned off but the drop leads straight to the ocean) where legend has it, Chieftain O’Conner, threw every last one of his daughter’s to their deaths rather than hand them over to the Viking hoards invading the land (so possibly not the best place to visit on Father’s Day…) After a quick bite to eat at Namir’s Restaurant https://www.facebook.com/Namirs-Restaurant-1816277755284321/ (all that swimming, walking and sea air will take it out of you) I headed to the Bromore Cliffs.

They are only a 2 minute drive away from Ballybunion town and Kerry’s lesser known version of the Cliff’s of Moher (ours are better – said non-biasedly of course!) They are definitely less visited and cheaper to access. Prices are charged a bit differently and it is cash on arrival only with a car (including passengers) costing €5, a motorbike €3, a bicycle €2 and €2 per pedestrian (I’m pretty sure I could fit at least 3 people on my bike for next time…)

All that gallivanting took it out of me and I made for home but I’ll definitely be heading back soon. Ballybunion is a jewel in the crown of North Kerry. 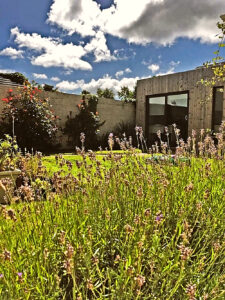 How To Delve Into The Self-Catering Market In Ireland 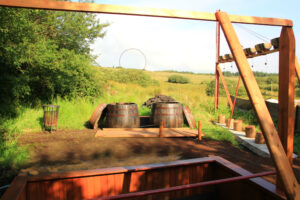 Heading up to the Bog on a Relaxing Adventure! 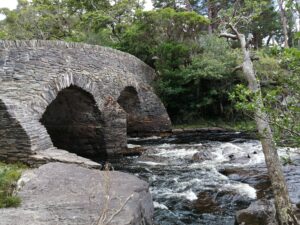 Heading Back to Nature at Killarney National Park

Here at Staycations-Ireland, we offer a wide range of unusual accommodations and activities

Our combination packages can include car rental and private transfers. We only use highly rated accommodations. Whether you are interested in activity or adrenaline based travel or simply relaxing outdoors, we offer everything from kayaking to coasteering, hiking to mountain climbing, whale-watching to horse-riding and even foraging! We organize everything for you in advance, so all you need to do is relax and enjoy your holiday.